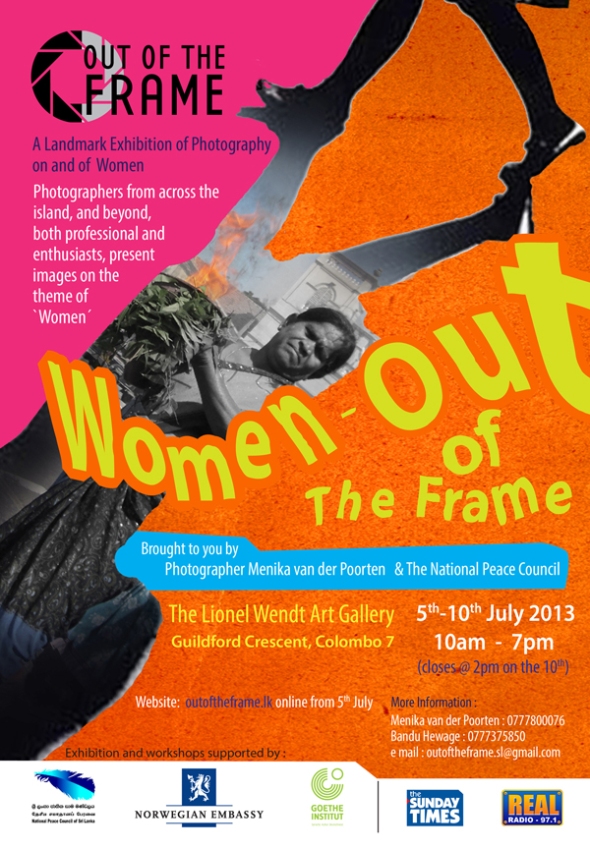 Colombo recently celebrated ‘women out of the frame’! An exhibition of paintings with the ambitious target of showcasing women apart from their stereotypes, which was on display at the Lionel Wendt from July 05 to 10th.

We all know the stereotypes, the wife and mother, the hand that rocks the cradle, the delicate bride, the flower bedecked temple-goers… 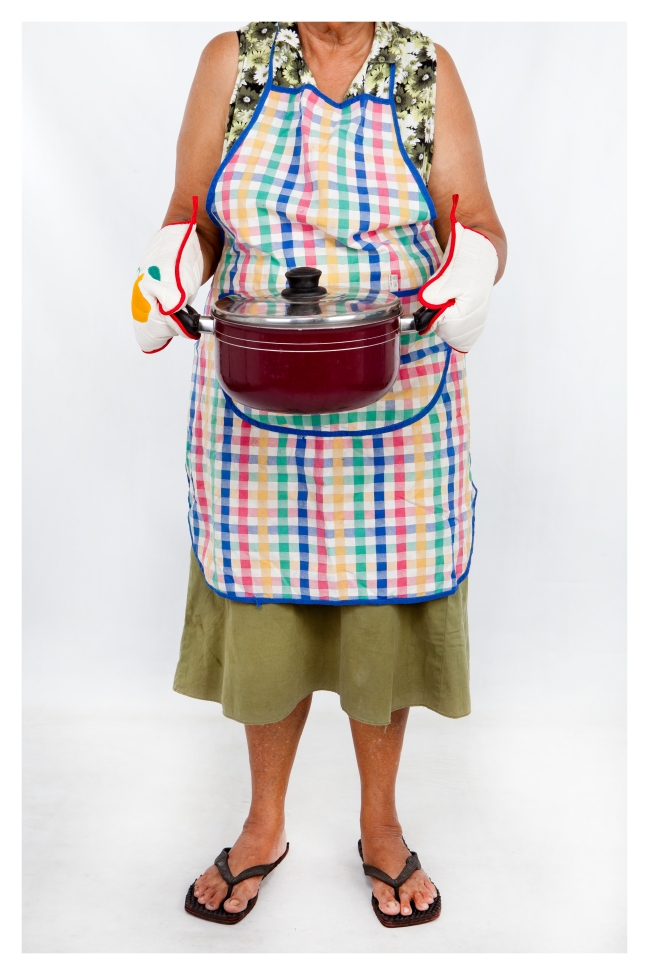 Surprisingly they were on display too, the familiar portraits we all know of women ‘within the frame’ in their stereotypical roles and actions. But the exhibition did showcase what it promised to, too. “Women out of the frame”, in roles and poses which we are not used to seeing them in.

Or if we are used to seeing them, at least not ‘seeing’ them in quite such a way as the framed portraits enabled us to now see them. For example, we all know of frail, elderly cleaners at offices, stadiums and theaters but how many of us accord them more than a passing glance, to be relegated to the periphery of our consciousness?

One such portrait of a cleaning lady, Sujani Wijesundara’s “Cleaning in Colour” was quite striking. A frail lady in a drab dress cleaning bright red and yellow seats, perhaps at a theater. The bright and polished reflections of the chairs in stark contrast to the lack of lustre from the lady herself was striking, in the way the picture conveyed its ‘thousand words.’ 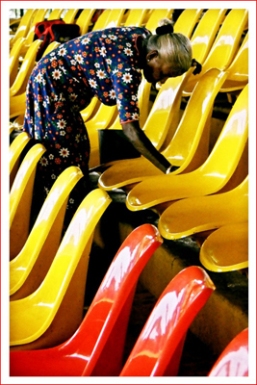 There was much other food for thought in the various series and stills of women on display. Revathi Chawla’s series of portraits of a transgender woman, or rather a man living as a woman without benefit of surgery, was interesting too. If the caption hadn’t given away the fact that the portraits were in fact of a man rather than a woman, many might not have noticed. The series made for some interesting viewing of a seemingly happy lady of a lower middle-class background. We needed the caption to tell us it was of a tansgender person. He/she seems to have made do with her lot in life quite well. 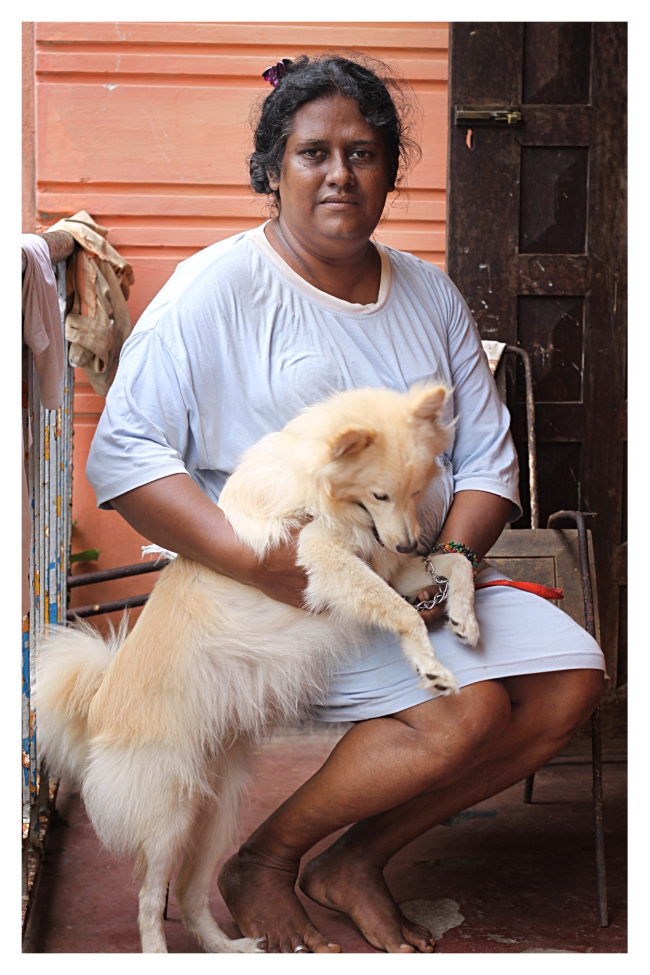 The transgender lady whom we know of only as JP, with her dog

The portrait this writer found the most striking however was Liz Fernando’s juxtaposition of a tribal woman and a modern one – a conceptual ‘experiment’ as it were.

She had juxtaposed two images, one of a tribal woman with her hair oiled, coiled and decorated with pink roses, and a paler one of a modern woman with straight hair. The figures not completely aligning, one seemed to be within another, almost as a ghost  – or perhaps as the photographer intended, an alter ego. 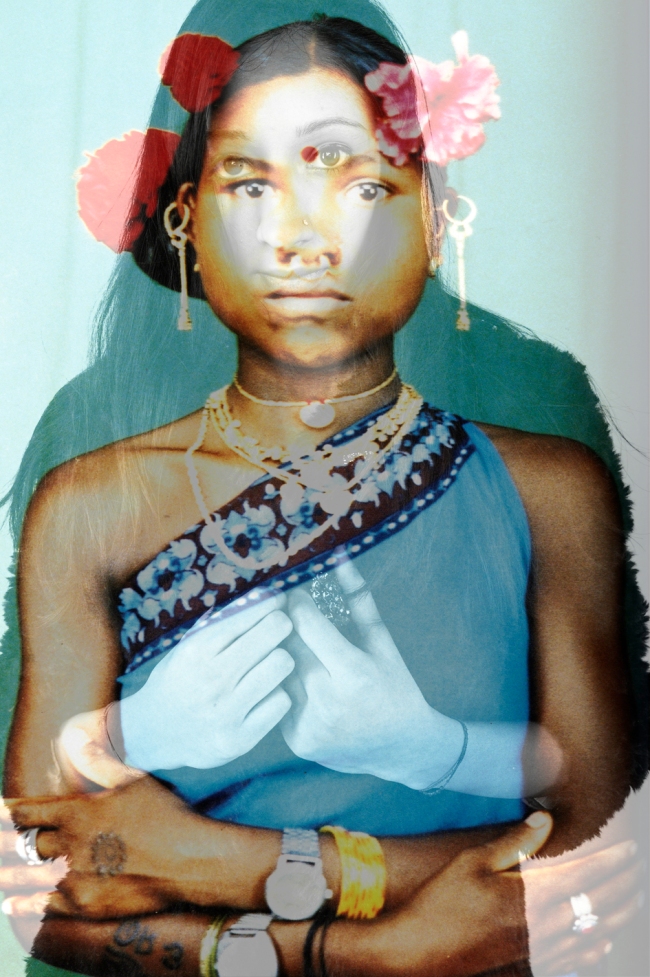 The portrait caption and description were rather long but worth reading in order to fully understand what the artist intended:
‘In between, we are searching for the tribe, where we belong

A woman’s identity is highly dependant on her place of upbringing and its interlinked social conditions. More often than not, South Asian / Sri Lankan women living in Diasporas all over the world see themselves trapped ‘in between’, not knowing where to belong. Sometimes they are judged only by their appearance as the soil of their motherland slowly loses its grip on them. This work visualizes the struggle of women in the complex vacuum, their so-called cultural identity and the questions of who and what actually defines the notion of a cultural identity.
In between, we are searching for the tribe, where we belong.’

Powerful words to follow a powerful picture. Perhaps this picture specifically appealed to me because I was once such a diaspora female being pulled apart by the notion of ‘cultural identity’ and where I fit in.  It is more often the women rather than the men who get pulled apart with these concepts and Liz Fernando, perhaps another diaspora member who knows first-hand what it feels like, has conceptualized the struggle brilliantly. The portrait showcases a pale shadow of a ‘modern woman’ with still a strong element of the ‘tribal woman’  – the genes of generations of her foremothers whom she has broken away from, only within the last generation or two, pulling at her.

A circumbulation of the Lionel Wendt Art Gallery was well worth the time and effort for all those who attended the exhibition. Various contributors from all over the country, both expatriates and locals, professionals and amateurs had responded to the call for submissions. The exhibition, the brain child of photographer Menika van der Poorten and the National Peace Council, supported by the Norwegian Embassy, was successful in achieving its objective. An interesting array of people contributed. A Tamil Grama Niladhari from Killinochchi, Selvarajah Seanthan had contributed one of the best photographs of a woman ‘out of the frame’; a one-armed woman engaged in construction work!

She had apparently lost both her arm and her husband to the war. She had been granted money not nearly enough, by a charity to build a house and since the money did not cover the necessary labour costs, she got busy at the site herself, contributing to the building of her home – with one arm. 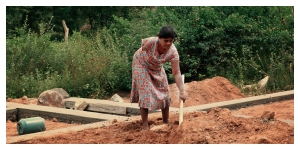 Another contributor who stood out was Zackiya Ashraf, who was moved to take up photojournalism after visiting cancer patients, who insisted on smiling for the camera, because they wanted to be remembered for their smiles rather than their pain. “I realize that it is people who offer untold photographic opportunities that inspire and move you. My aim is to capture the character of the person and not just the image” says Ashraf. 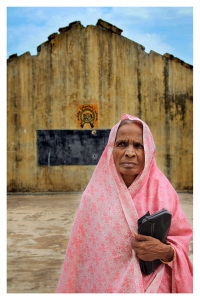 Her contribution to the exhibition was that of a frowning middle-aged woman standing against a stark brown building of some sort. “The silent Rebel: the teacher shows signs of disapproval at the state of her classroom transformed into a guerilla training camp” reads the caption underneath.

Ah! So that was why the frown. The eye is now drawn to the LTTE logo of a snarling tiger, on the wall behind her. ‘Within the frame’ stands this lady, her puckered face of disapproval a testament to her unhappiness. She sought to teach and to progress. But the institution that she sought to do it in had been subverted for another cause.

A few frames away, another Muslim lady, with the characteristic sari pallu over her head, showcases another issue of victimization by the war: missing relatives. 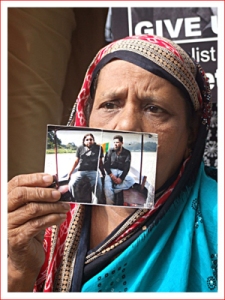 Both of Noor Najeeba’s sons had gone missing in 2010 and she has been campaigning to find out where they are ever since. Contributed by veteran journalist Dushiyanthini Kanagasabapathipillay, who has made a name for herself covering civilian causalities of the war, one of the most moving exhibition releases was of Noor Najeeba reaching out to her own showcased portrait – where in turn, she is exhibiting a picture of her beloved sons. The mother again reaches out to those two sons, whom life has now deprived her of reaching out to, in the flesh.

We are all familiar with the stereotypical portraits of motherhood a la Madonna and child, but this was another powerful rendition of a mother’s love. True to the exhibition’s promise however, it was ‘out of the frame.’